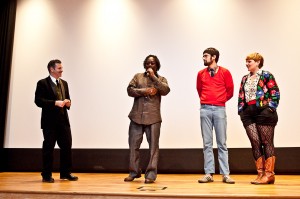 The Fellowship program is funded by the Oregon Arts Commission, Oregon Public Broadcasting and the Gordon D. Sondland and Katherine J. Durant Foundation, with additional in-kind support from The Oregon Film & Video Office and Chambers Communications.

The goal of the Media Arts Fellowship program is to support outstanding moving image artists who live in Oregon and whose work shows exceptional promise and demonstrated commitment to the media arts. A distinguished panel reviewed 30 submissions from applicants throughout the state, weighing artistic merit, the potential of the proposed activity to advance the artist’s work, and the feasibility of the projects proposed.

Matt McCormick saw his first feature length film, SOME DAYS ARE BETTER THAN OTHERS, premiere at this year’s SXSW Film Festival, and it will be released in theaters in 2011. More than a filmmaker, and known for being a relentless DIY artist, he founded, and was the former director of, the PDX Film Festival, and also founded Peripheral Produce, a video distribution label. McCormick has collaborated with artists and musicians such The Shins, Miranda July and Patton Oswalt, to name a few, on various projects.

Both a former award winner and creator of trailers at the Northwest Film & Video Festival (30th and 31st, respectively), Nick Peterson is a fixture in the Portland film community. Though he’s experienced with digital video, he seems to prefer a more antiquated medium (at least by indie filmmakers these days) in super 16mm film, which he used to shoot his last two films, YELLOW (2006) and this year’s FIELD GUIDE TO NOVEMBER DAYS, his two feature-length films. Peterson, along with collaborator Mary Defreese, have been praised for their promising singular vision and their film’s unique aesthetics.

Elijah Hasan’s stop-motion created short, COINED, is screening as part of this year’s Shorts II program, and at last year’s Film & Video Festival his short IS THAT ME won both the Audience and Judges Choice Awards for Best Experimental. He’s been teaching video technology, 3D animation and photography to middle and high school students in North and Northeast Portland area since 2006. Hasan produced the TV show REAL SESSIONS for 15 years, and made the documentaries ONE WOMEN’S JOURNEY and A MUSLIM CATHOLIC MEAL.

The application deadline for the next round of the Oregon Media Arts Fellowship is September 30, 2011. Application information is available from the Northwest Film Center, www.nwfilm.org; or by contacting Thomas Phillipson, [email protected], (503) 221-1156 or the Oregon Arts Commission, www.oregonartscommission.org, (503) 986-0082.