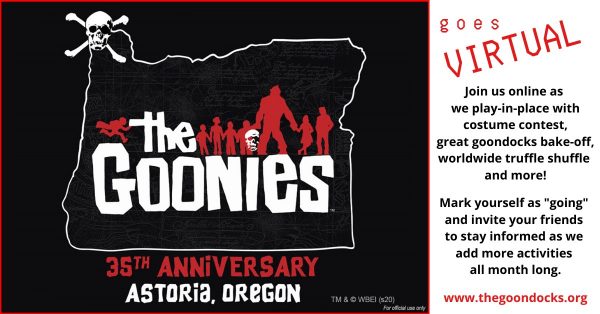 With Covid-19 restrictions still in place, Goonies day decided to go virtual this year as they celebrate the 35th anniversary!

Goonies Day is Sunday, June 7 – you can subscribe to their YouTube video and set your alarm to join the celebrations at 12:00 PM Pacific Time.

There will be lots of fun events and contests, fans will “get silly together with a Worldwide Truffle Shuffle, watch a live Q&A with Adam F. Goldberg about his Goonies fandom, his television show The Goldbergs, and so much more.”
Continue reading... “Goonies Day and 35th Anniversary Goes Virtual This Month!”

It’s been 35 years since The Goonies audiences first went in search of treasure with a lovable band of kids from Astoria into the caves beneath the northern Oregon coastline and Ecola State Park. To celebrate the 35th anniversary of the film, Oregon Film and Travel Oregon will offer public screenings of the movie in several cities around the state—from Salem Cinema to BendFilm and Eugene’s Broadway Metro to Baker City.

This combined effort and tour is to support the Oregon Film Museum, the Astoria-Warrenton Chamber of Commerce and the official Goonies Day in Astoria celebration event June 4-7, 2020. Continue reading... “UPDATED: “The Goonies” Celebrates its 35th Anniversary with Statewide Tour”