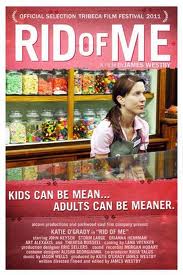 “Rid of Me”, directed, written, and produced by James Westby and Produced by star Katie O’Grady has been acquired by Phase 4 films.  The film has already had great success in several film festivals including the Tribeca Film Festival earlier in the year.  As announced today in Deadline Hollywood the film will get a theatrical release through the deal.  Phase 4 has a wide array of titles in it’s catalog most recently being Kevin Smith’s “Red State”.  No details on the exact release date but the announcement referenced a fall date. Continue reading... “Local Film “Rid of Me” Secures Distribution with Phase 4”