*Note: This is an opinion piece written by Portland-area actor Harold Phillips and originally posted on his blog at http://trishandharold.blogspot.com.  The views expressed here are his own, and are not necessarily the views of the administrators of the Oregon Confluence blog. 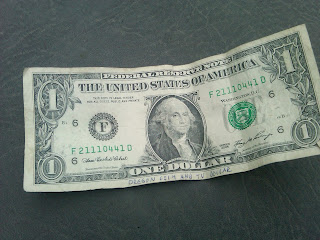 Well, someone out there gets it! Take a look at what showed up in my change yesterday when I bought a Viso at my corner mini-mart!

While the legality of writing on US currency is a bit questionable, the message is clear – the Film and TV industry in Oregon is bringing money into the economy!

Film and TV dollars aren’t just going to rent equipment and cater the craft services tables on the set of Leverage… they’re going into the pockets of people who spend those dollars at the corner store, keeping local merchants in business.

This is a message that needs to be repeated often, especially in light of the upcoming governors’ race here in Oregon. Whether John Kitzhaber or Chris Dudley moves into the Governor’s Mansion this November, they’re going to have a lot of hard work to do. Oregon’s economy is still in trouble, and our current budget shortfall has brought proposals for a 9% across-the-board cut in state agencies – bringing drastic cuts to Oregon schools, health services, and other programs. Add to this an 11% unemployment rate, and whomever the new Governor is… he’s going to face some challenges.

In an environment like this, it would seem logical to shore up the industries bringing jobs and revenue into the state – yet, to date, both Dudley and Kitzhaber have been silent when it comes to their support of one of the few industries actually growing here in Oregon – the film and TV industry.

According to Susan Haley at the Governor’s Office of Film and Television, this industry brought $62,000,000.00 into the state in “direct spending” last year (Portland AFTRA president and SAG National Board member Mary McDonald-Lewis points out that “indirect spending” has a conservative multiplier of 2 – by industry standards – which makes the actual total brought in more like $124,000,000.00).

As of February of this year, TNT’s hit show Leverage – just ONE project in this industry – had hired over 900 Oregonians to appear on camera – and many more to work behind-the-scenes as carpenters, grips, drivers… you name it (sadly, I don’t have any figures on crew positions at this point.)

Now, there’s been a lot of negative buzz lately about the “worth” of film incentive programs throughout the country… as this recent article in Parade Magazine points out, several states are suspending or reducing their incentive funds in the quest to balance their own budgets. Looking at the numbers above, it’s patently obvious that Oregon would be mistaken to follow this trend. When Ms. Haley at the GOFTV gave me last year’s revenue figures, she also gave me another figure – the amount the state spent as an incentive to bring outside projects in to shoot (the Oregon Production Incentive Fund gives producers a rebate – up to 20% – on what they spend here in Oregon when they shoot… unlike many other film incentive programs, though, producers have to spend their dollars in the state before they see any return). That figure? $7.8 million.

So, lets do a little math here… the Oregon film and television industry spent $7.8 million to bring production into Oregon… and that production brought at least $62 million into the state (or, if you factor in “indirect spending” – the hotel rooms and restaurants cast and crew eat at, the rental cars, the cell phones… etc, perhaps as much as $124 million.)

And at least one of those dollars ended up at my corner store. We can only wonder how many more have filtered into the rest of the Oregon economy at-large. So the question to the candidates for Oregon’s governor is clear – what are you going to do continue this industry’s growth, and continue bringing the jobs and revenue our state so desperately needs?

We’re still waiting for their answer…

One thought on “What Can the Oregon Film Industry Expect From a New Governor?”